On this page I demonstrate how to use a load duration curve in computing the long-run marginal cost of electricity.  The load duration curve can be used together with screening analysis to find the optimal capacity of different kinds of electricity plants.  With the optimized run time, the long-run marginal cost can be evaluated.

The graph below demonstrates the general objective of the load duration and screening analysis.  The graph inserts different types of capacity underneath the sorted load curve.  The amount of capacity in different tranches depends on cost minimization when determining the capacity factors.  The set-up of this graph is included in the spreadsheet for download below.  The power point presentation that is available for download below the spreadsheet is the set of slides that describes all sorts of electricity economic issues including the development of long-run marginal cost from a load duration analysis. 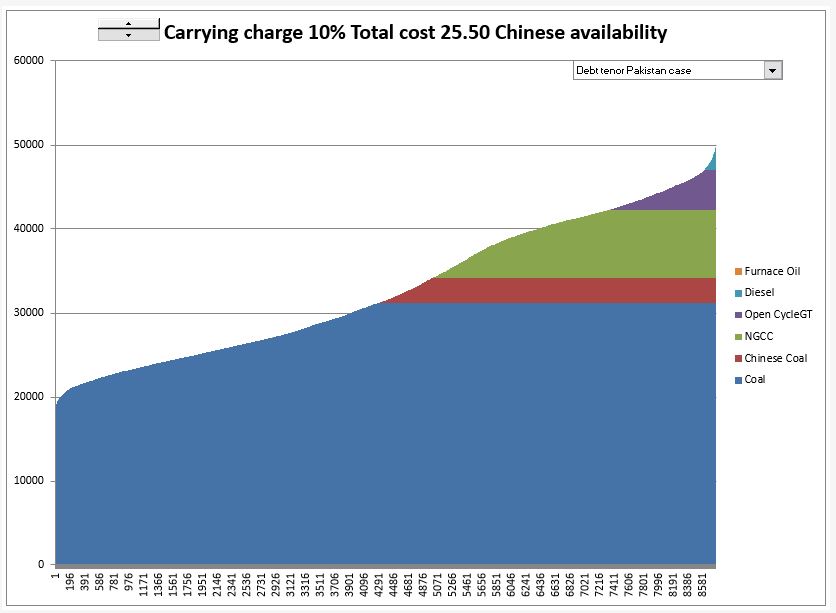 The graph can also be used to evaluate the short-run and long-run marginal cost.  The short term marginal cost is the running cost of each of the plant types for the different loads.  The long-run marginal cost is the weighted average cost of the different types of units where the capacity cost is weighted by the amount of capacity and the energy cost is weighted average cost of running capacity for the amount of time it is running.  Note that this is a somewhat simplistic analysis because reserve margins and cost of outages should be included in the analysis.

To illustrate how to compute long-run marginal costs and estimated costs of energy in long-run equilibrium, you can follow the steps below: 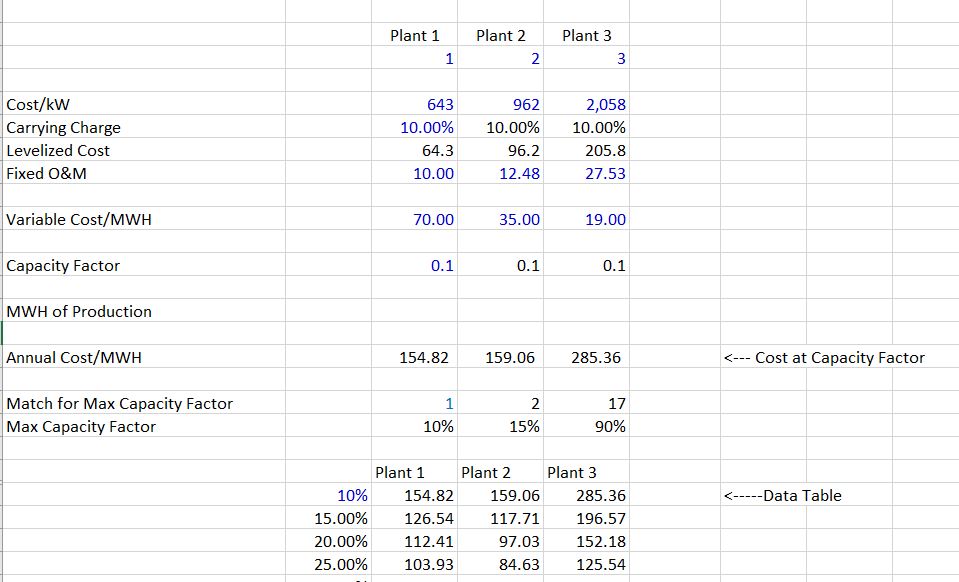 The graph below demonstrates how to compute screening analysis for the dispatchable capacity.  The capacity factor is on the x-axis and the total cost including both fixed and variable cost is shown on the vertical axis. In the case below, the red line for Plant 2 is almost always optimal.

Once you have computed the screening analysis, you can use the break-even capacity factors to fit the different types of capacity underneath a load duration curve.  The first step is computing the time underneath the load duration curve beginning with the low part of the curve.  Then you can match the break-even points with the various time factors.

I am afraid the video below really sucks.  But I have not bothered to make a new one and please do not make me feel bad by saying something OMG this makes no sense.

The file you can download below demonstrates how to compute long-term supportable prices in a merchant market that will allow construction of new capacity.  It is method that uses a peaker method to measure capacity and optimises costs from measuring the profit against merchant prices.