In this page I explain how the Weighted Average ROI is computed and its advantages relative to the MIRR or the unadjusted IRR as a measure value. This WROI is an important concept in asset management because it allows you to measure performance on a period by period basis. The Weighted Average ROI (WROI) gives a single statistic that allows management to quickly gauge the return on a project, but it does not have the re-investment assumption problems of the IRR or the distortions that make the MIRR irrelevant. To compute the WROI, compute the ROI (ROE or ROIC) on a period by period basis.  Second, compute the present value of each investment in the denominator of the ROI calculation and use this number as a weighting factor (the PV of investment divided by the total of all of the PV of investments).  Third, compute the weighted average with the SUMPRODUCT function where you multiply the ROI by the weighting factor. Using the WROI, income can be calculated as the weighted ROI multiplied by the nominal investment value over the investment period. The income from this calculation is added to depreciation resulting resulting in cash flow that would result from a constant ROI. If the cash flow from this constant ROI is discounted at the same rate as used in the weighted average ROI calculation, the valuation result is the same as the standard NPV calculation.  This means if you would rank different investments using the weighted ROIC, the ranking would be the same as the ranking from the NPV technique. This file includes the examples used in this webpage to illustrate various valuation issues. 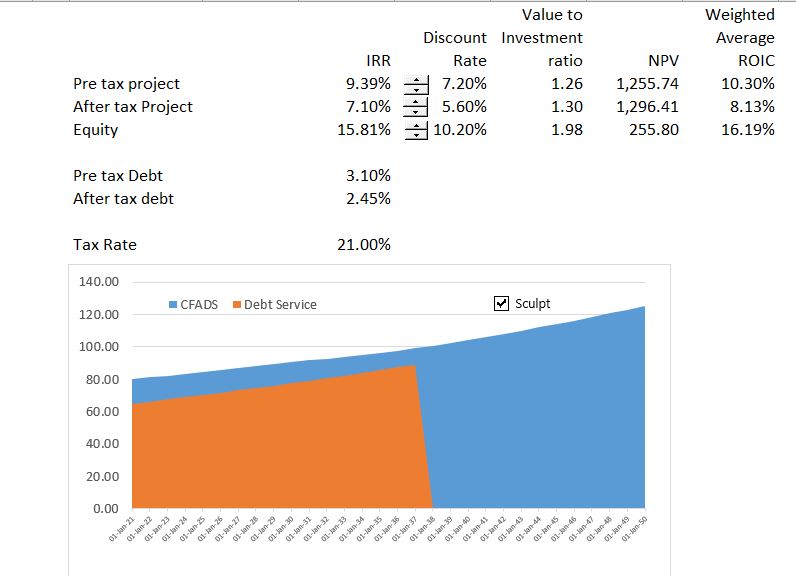 Ranking of Investments with WROI

To illustrate how the IRR can distort ranking of investments begin with the example used in the McKinsey article.  This case has an outlflow of 10 followed by positive 5 cash flow for 5 years.  This cash flow produces an IRR of 41.04%.  With a discount rate of 10%, the MIRR is 25.01% and the weighted average ROI is 47.02%.  The reconciliation of the NPV of 8.14 is confirmed with the NPV from the weighted ROI in the screenshot below. 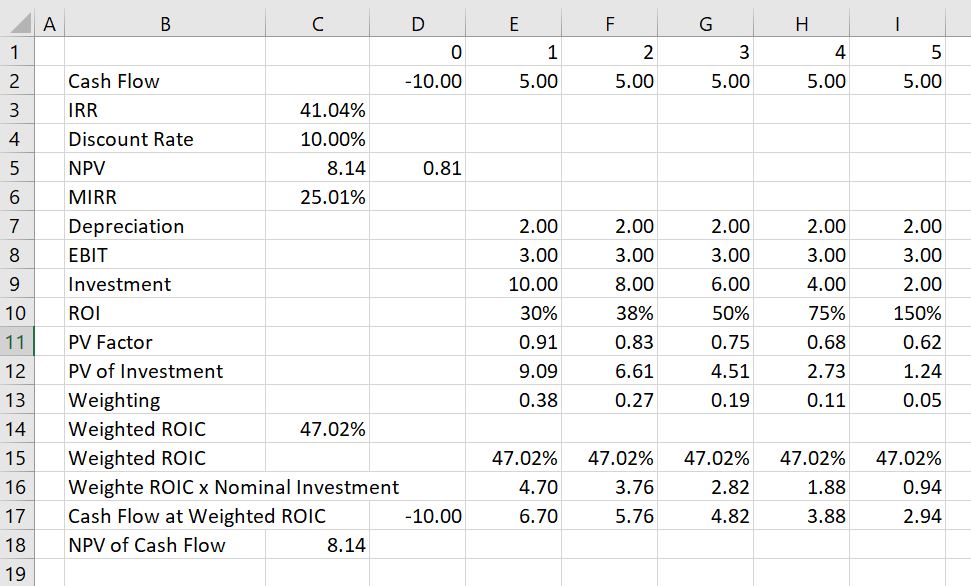 Next consider a case where there are no middle year cash flows and the final cash flow in period is 50. The cash flow of 50 is much more than the 5 years of cash flow of 5 that adds up to 25.  But because of timing, the unadjusted IRR is lower than the first case.  The IRR is 37.97% as shown in the screenshot below. But when the NPV is computed at a discount rate of 10% the NPV of the investment is higher — it is 19.13 rather than 8.14.  This is thus a classic case of different ranking for NPV and IRR.  The first investment with 5 years and a cash flow of 5 has a better ranking from the IRR than the investment shown in the screenshot below. But the first investment above has a lower ranking than the investment shown below when the NPV is used.  The correct decision would be to use NPV and take the second investment.

Case with Projects that have Different Lives Demonstrating Problems with MIRR

In the second case where the cash flows are simply extended, the IRR increases to 49.08% (not too much) and the MIRR declines from 25.01% to 23.07%.  The NPV of the investment more than doubles from 8.14 to 18.84.  Thus, the MIRR would actually suggest that the investment below is worse than the investment with only 5 years of cash flow.  The MIRR is not consistent with the NPV.  The NPV is B.S.