This page includes a discussion of corporate finance theory that provides a basis for the corporate finance on-line lessons.  The videos and the slides below demonstrate that much of corporate finance, in particular cost of capital theory, WACC and ROIC, can be qualified more as magic potion than as solid economic theory. The magic potion includes attempting to derive an earnings multiple from historic data or comparative companies; all of the implicit and explicit assumptions that go into terminal value calculations; and the witches brew necessary of appropriate calculation of ROIC.  The ROIC problems arise from firms that have some service businesses; calculation of ROIC for companies after taking a write-off; computing ROIC for companies with lumpy capital expenditures and computing ROIC for companies that have sold of assets.

Some of the innovations in Corporate Finance Theory on this website include:

When I first read the McKinsey book in the early 1990’s I thought this was really a special book. Some call it the Bible or the Koran of finance. It seemed to explain ideas like cost of capital in a simple way; it pointed out the overall free cash flows should be used instead of equity cash flows; and, it “discovered” that value comes from earning returns above the cost of capital.  Then I re-read the book a few years later and thought that this is really not very special.  The McKinsey book worships companies that make monopoly profits by getting people addicted to their products (like Coke, Starbucks, Apple and McDonalds) and it does not deal with forecasting of how companies will keep the monopoly profits going. I re-read the book again recently and thought is was not very good.  The book does not address nuances of using formulas it presents; it does not prove why anything works; it does not start with the most basic principle of all, namely that companies should make positive NPV decisions; it does not discuss many situations like Uber where the ROIC does not mean anything at all; and, it does not deal with the dangers of believing high returns can be sustained.

I have presented a few examples of where this Finance Bible goes wrong with some quotes from the book that mean absolutely nothing.  Take the statement below which should make your head shake. The McKinsey quote ignores the most fundamental principle in all of finance that companies should just make incremental positive NPV investments. It also seems to not understand one of the most basic ideas in economics that you cannot do anything about sunk cost. 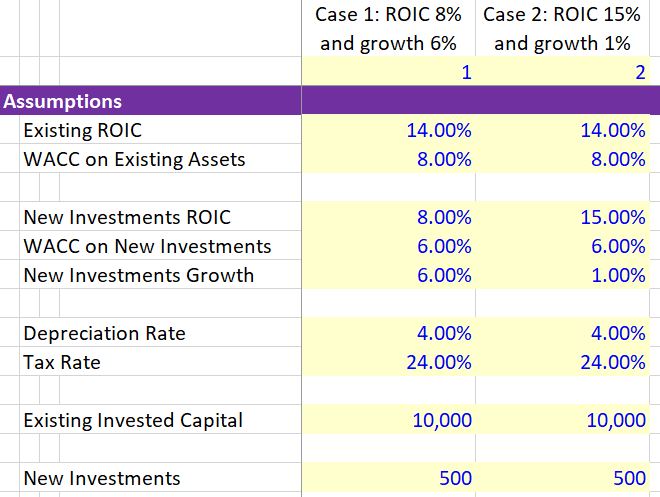 By not making the positive NPV investments, the case with a high ROIC and low growth has a value that is LESS than the case with the much lower ROIC and a higher growth. (You can assume that the higher growth and lower ROIC case is the situation where growth in invested capital simply comes from making positive NPV investments to upgrade plants).  It is hopefully obvious to you that the rate of return on the existing investments has nothing to do with creating or destroying value.  Existing investments are sunk.  A point that McKinsey apparently does not understand, but that is one of the most fundamental ideas in all of economics. You can look at the simple model by pressing the button below.

Results of the two scenarios are shown in the two screen shots below.  The first screen shot is the case with 15% ROIC on new investments, but only 1% growth.  This strategy implicitly assumes that because of fancy power point slides on ROIC and over-estimation of WACC, that good solid investments in existing plants are not made.  In this case the total enterprise value of the company is 22,896.  Again, you can look at the attached spreadsheet to see the straightforward assumptions required to make the calculation.

In the second scenario, the new investments grow faster but earn a lower ROIC. (In the analysis the cash flows from the new investments are separated from the irrelevant sunk assets). Here, the value of the cash flows that earn a lower return but have a high growth rate increases the enterprise value to 36,790.  This higher value has nothing to do with the BS of focusing on growth or ROIC, it is just about making good investments.

This seemingly pro-american statement should make you cringe. First, if U.S. companies are really earning such high profits, then the question should be asked as to why is the economy is structured to allow monopoly profits and what is the effect of these monopoly profits on things like the distribution of wealth.  Second, the lower ROIC of Asian companies may be due to the fact that they still build things (unlike Mr. Trump who sells his brand name and has no invested capital). Third, the over-estimation of cost of capital and the refusal to invest in projects that don’t earn extreme monopoly profit in the U.S. in fact destroys value of a company because positive NPV investments are not being made as demonstrated in the above example.

McKinsey spends 892 pages telling you that the only reason you should be in business is when the ROIC is greater than the cost of capital.  Then they implicitly suggest that you assume over the very long life of a company that the WACC equals the ROIC.  How utterly absurd.  If the ROIC equals the WACC the whole theme of the book is that you might as well close shop.  How could you make such an assumption in a DCF analysis. These long-run DCF issues about what will happen to a company in terms of growth and return boil down to philosophy and not economics or finance. McKinsey cannot acknowledge this.

McKinsey makes the following statement with respect to the internet bubble and the valuation.  This quote which has turned out to be completely wrong as evidenced by GAFAM (Google, Apple, Facebook, Amazon, Microsoft) does demonstrate that corporate finance often amounts to predicting the ability of a company to sustain monopoly profit.

The notion of “winner take all” led companies and investors to believe naively that all that mattered was getting big fast, and that they could worry about creating an effective business model later. Increasing-returns logic was also mistakenly applied to online pet supplies and grocery delivery services, even though these firms had to invest (unsustainably, eventually) in more drivers, trucks, warehouses, and inventory when their customer base grew. When the laws of economics prevailed, as they always do, it was clear that many Internet businesses did not have the unassailable competitive advantages required to earn even modest returns on invested capital.

The history of stock prices and the internet bubble (which was more about telecom’s than start-up internet companies) is discussed in the video below.  The value of Amazon, Priceline, Paypal and all of those companies critiqued in the McKinsey statement have obtained stock prices that reached the sky.