This page demonstrates how important financing cost and financing analysis is in battery and solar analysis. The price that is required to provide investors a given return is computed using a carrying charge rate. I explain how the carrying charge rate is driven by many factors including the construction period, the credit spread, the equity return, the debt to capital percent, the tax rate, the decommissioning and inflation rates.  All of these factors can be expressed in a single number that assumes real prices remain constant over the lifetime of the investment. Both batteries and solar power are highly capital intensive with low operating costs relative to up-front capital costs.  This means the carrying charge rate and cost of capital is a major driver for the analysis.

If the carrying charge rate for the battery is low, then a lot of both battery and solar capacity can be justified to reduce the cost of diesel.  When you press the button to optimise, a 2,170 kW of solar and 1,764 kW of battery capacity is added to the microgrid as shown in the screenshot below.

The relationship between the price computed from a carrying charge rate and a financial model is illustrated in the screenshot below using a simple case.  The carrying charge is computed using the PMT function with a five year project life and a cost of capital of 10% is computed to be 262.8 (without inflation, taxes, debt, degradation, decommissioning and other items).  In this case there are two investments over five years. The screenshot demonstrates that the carrying charge using the PMT function results in correct revenues to produce the required return of 10%.

With batteries and storage it is probable that lifetime of the battery will not be the same as the lifetime as a solar project. In the screen shot below I demonstrate a case where the life of the solar project is assumed to be 7 years.  As the battery has a life of 5 years, two batteries must be installed. The second battery will be sold (or used elsewhere). This means that you must reflect the residual value in the financial model that reconciles the carrying charge rate with a computed IRR.  To compute the residual value, you should use the section that contains economic depreciation as illustrated in a simple way on the screenshot. Note that value after economic depreciation is 656 in year 7.  With this value used in the cash flow analysis (the financial model), the financial model is adjusted and yields the correct 10% return.

The first screenshot below shows how you can enter assumptions that apply both to the carrying charge and the financial model. (This is from the retail rate and storage model that you can download from the second button at the top of the page.) In the first case, simple assumptions are applied with no debt, no residual value and no taxes. When you change assumptions on this page, the carrying charge rate changes and the financial model inputs are adjusted.  Please note that the colours are made in seconds from the generic macro file.  I beg you not to waste time colouring. 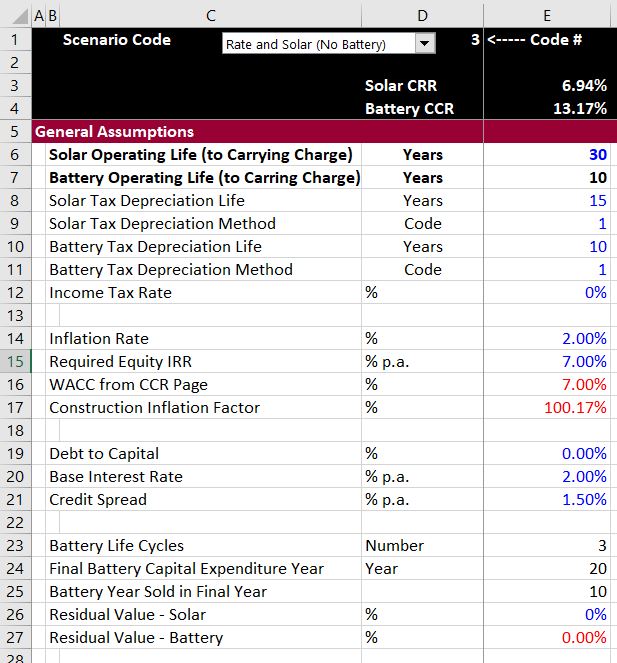 With these assumptions, the financial model in the case with only solar is shown.  This is an excerpt where inflation and degradation are illustrated for the solar charges.  The important thing to note is that the project IRR and the equity IRR are the same as the target return of 7% that is input.