There are some mysteries to me about tax equity transactions for which I probably am mistaken.  These days, investors seem to favor back-leverage rather than project debt.  As back leverage is not debt of the partnership, it does not affect the capital accounts and does not impact the tax basis or the inside capital account (discussed on the associated page).  It is understandable that the tax investor wants a senior position to debt, but putting debt at the project level may reduce the potential for stranded tax. With project debt, the tax investor takes on a high proportion of the debt meaning the outside basis will have a higher value. The issue therefore is why not use project debt if the project debt increases shared liabilities in the outside tax basis and thus reduces the potential for stranded taxes from the outside basis.  Another question is how to compute the gain on the sale of property by the tax investor after a sale of his interest to the sponsor/investor.

Substantial economic effect. The question is whether a tax equity investor is a partner or is a “bare purchaser of tax benefits”

Definition of Outside Basis

When the tax returns are filed, both the outside basis and the inside basis are submitted to the IRS — I have seen the tax forms (which are very simple). The account discussed on this page — the outside basis or the tax basis — is the account that matters most.  It is the capital account that can affect the after tax IRR of the tax investor by limiting the tax deductions of the tax investor. 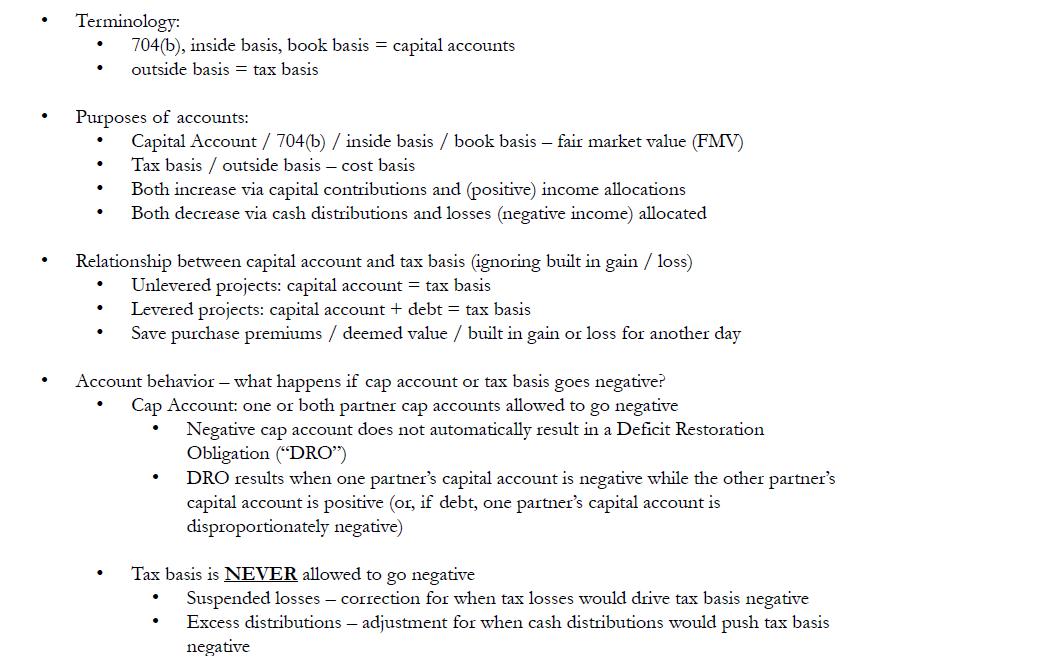 A tax investor’s tax or outside basis is equal to the total of :

You should be able to reconcile the tax basis of the To explain the tax basis, you can think of the balance sheet at the partnership SPV.  The assets are the net plant of the partnership less the 50% ITC basis adjustments.  The balance sheet should balance.  There are two items that can affect the outside basis of the tax basis.  The first is dividends paid (pre-tax dividends from the cash flow distribution) that can bring the balance to below zero.  The second is suspended losses that are computed after the excess dividends.

The Outside Basis cannot be Negative

Gain from Dividends paid above the Balance of the Outside Basis — Section 731(a)(1) Gain.  (Also Called Excess Distributions, Deemed Sale)

Distributions Cash or property (and constructive cash distributions from reductions in share of liabilities) in excess of a Member’s Tax Basis.  Here the tax investor is assumed to have no more economic interest.

The gain will increase the outside capital account or the basis of the Tax investor so that the end of year basis of the investor will have a balance equal zero.

I have included a lot of examples of the outside basis.  This should get boring because the accounts are all about the same. There is always a sub-total to compute the deemed sale or excess dividends; there is always a section for the suspended losses.  Note there is no section for the DRO.  There may be a section for share of liabilities, but not a section for the minimum gain. The format of the outside basis is consistent in models with a sub-total for computing the limit on taxes if dividends exceed the invested capital of the tax investor and an NOL type mechanism called the suspended loss if the balance of the tax equity is still negative.

Here is the second example from an actual model.  It is for a wind project and with the assumptions the amount does not go down to zero.  But the titles are the same.  Note that the positive income is separated from the negative income for computing the deemed sale.

Here is another example where the model has a very similar structure.  There is a sub-total for computing the balance to evaluate the excess dividends.

One of the best examples is show in the screenshot below.  Here is another example that includes an line item for share of liabilities.  Note the that when the liabilities are added at the beginning of the process, the liabilities increase the outside basis.  Then when the liabilities decline, the outside basis.  The simple example below illustrates that this adjustment results in the outside capital representing the share of total assets rather than only the equity capital.  The example also demonstrates that project debt has an advantage in that it reduces the exposure to stranded tax as the outside basis is increased.  I understand that tax equity does not want any exposure to being subordinate to debt or to have the possibility that the SPV will declare bankruptcy.  But the addition of the liabilities to the balance makes one wonder why project level debt is not used more often. 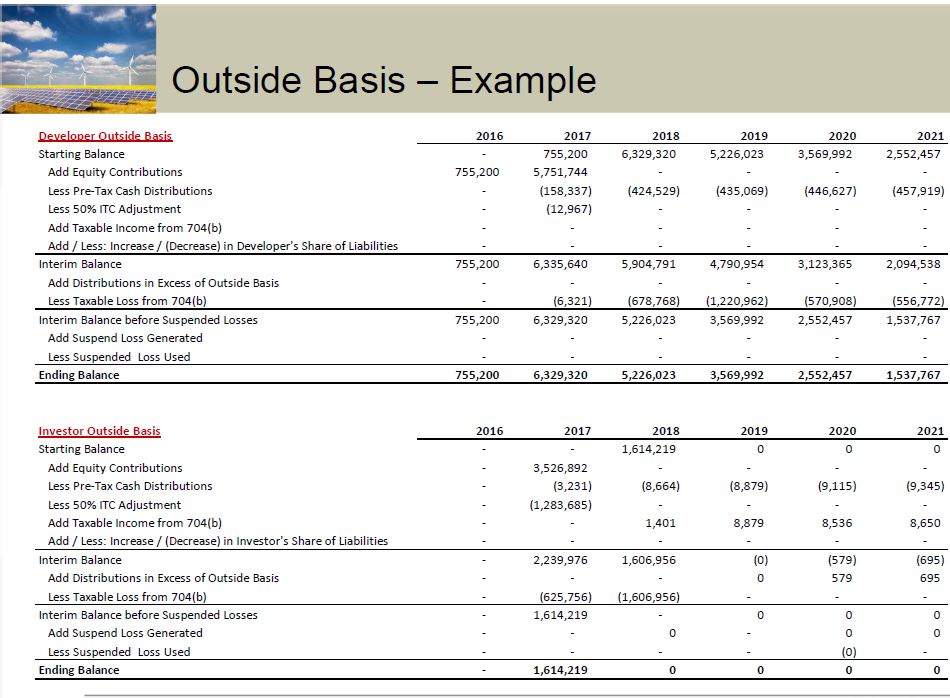 Beginning of period and end of period liabilities. This means that you should set-up a beginning balance and a closing balance for the debt at the partnership level and then allocate that debt to the tax equity investor and the sponsor/investor. The tax investor basis includes its share of liabilities of the LLC – for example, debt at the partnership level.  This implies that any change in those liabilities (either through increased borrowings, debt payments or changes in the ratio in which those liabilities are shared among the Member’s) results in a change in the tax investor’s basis. A reduction in the tax investor’s share of liabilities (from debt repayment) is treated as a Constructive Cash Distribution reducing basis.

Simple Example Demonstrating Why and How Shared Liabilities are Included 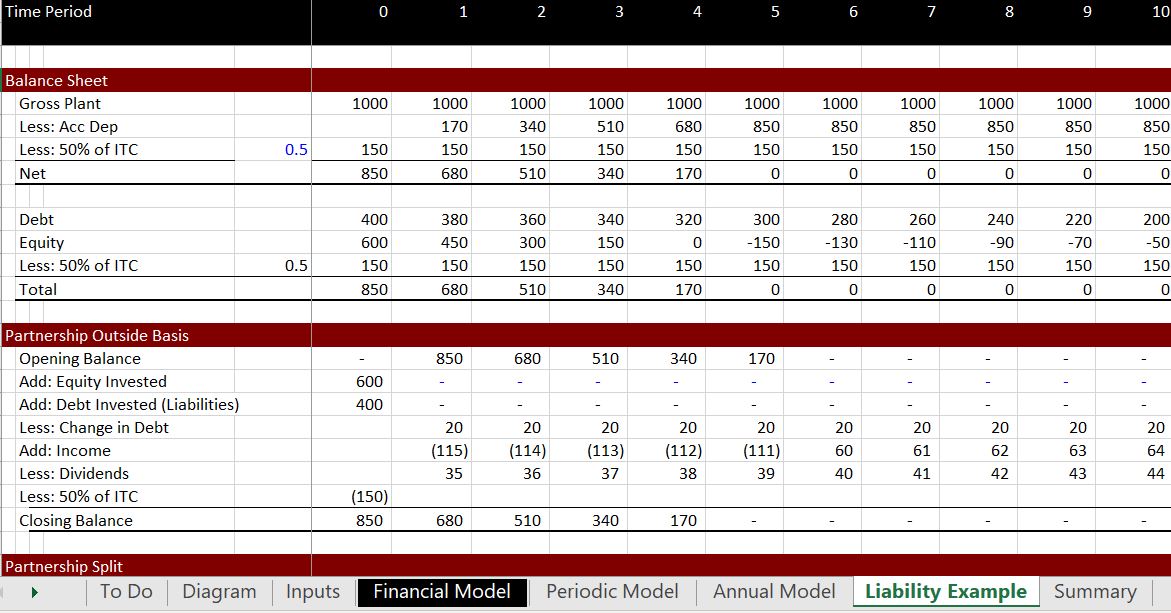 Here is a quote from Deloitte on the idea that the tax investor must have economic substance in the investment. 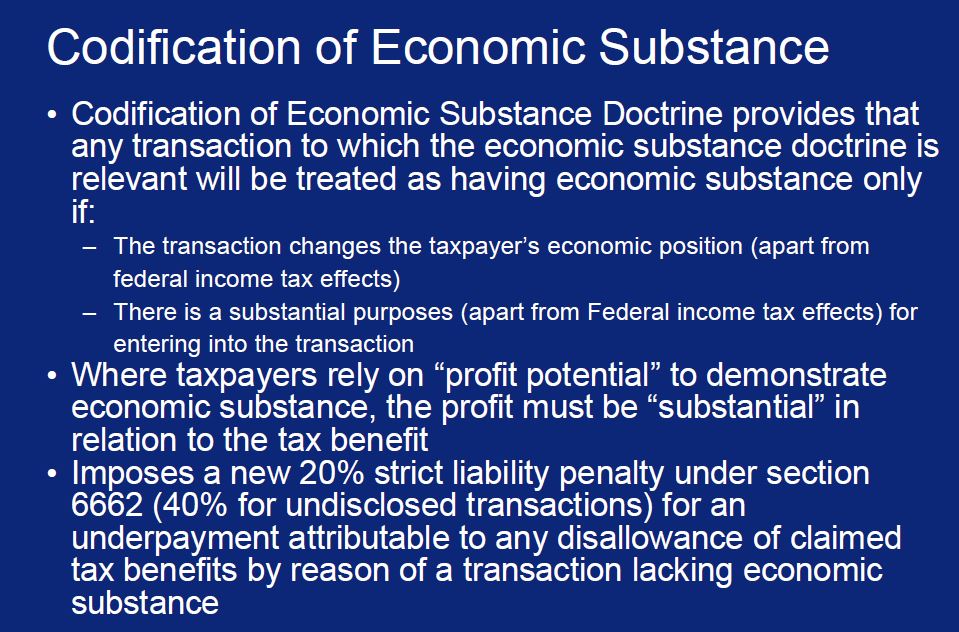