In the case of a constant distribution, you can simply use the formula (RAND()-.5) instead of the NORMSINV() in the time series equation.  In this case, when you multiply the (RAND()-.5) by the volatility, you can use the volatility to estimate the probability of being above or below a level.

A couple of files with some general exercise on working with the normal distribution are available for download below. The screen shot below shows various ways the normal distribution can be used. The numbers in the box show that when you either add one standard deviation to the mean AND deduct one standard deviation from the mean, you achieve the famous 68% probability number. 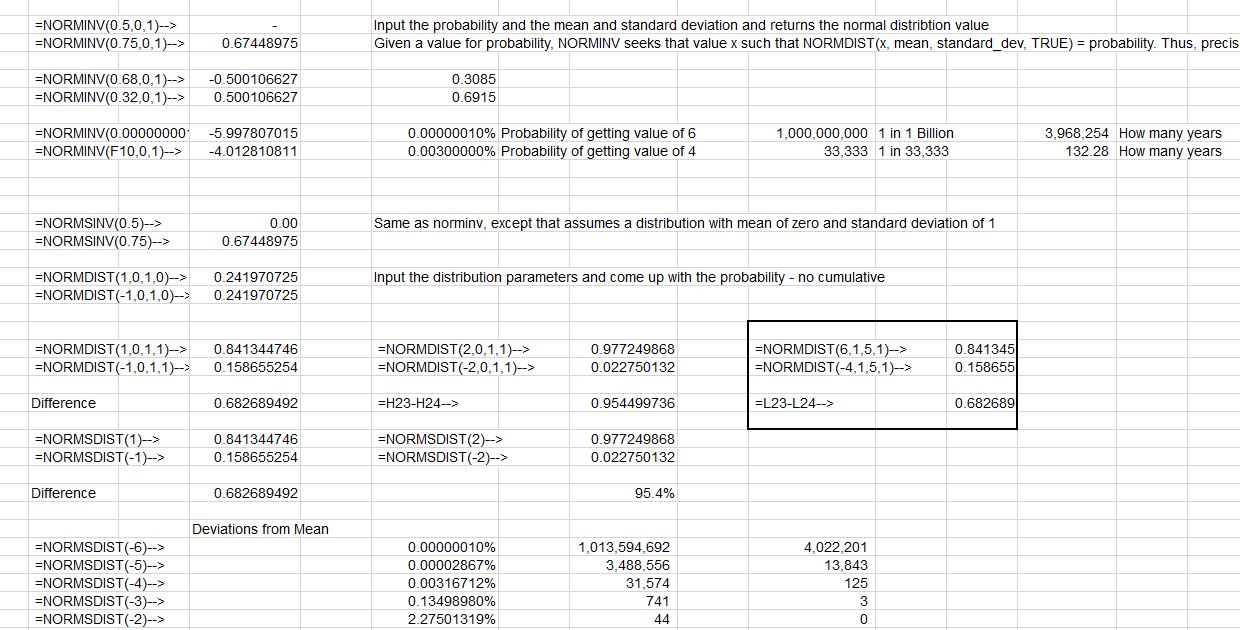 The second screenshot below shows how the NORMDIST and the NORMINV functions work.  Note again that you can enter the standard deviation and achieve the 84% or 16%.  You can do the inverse where you put in the probability and arrive at the value of the normal distribution. 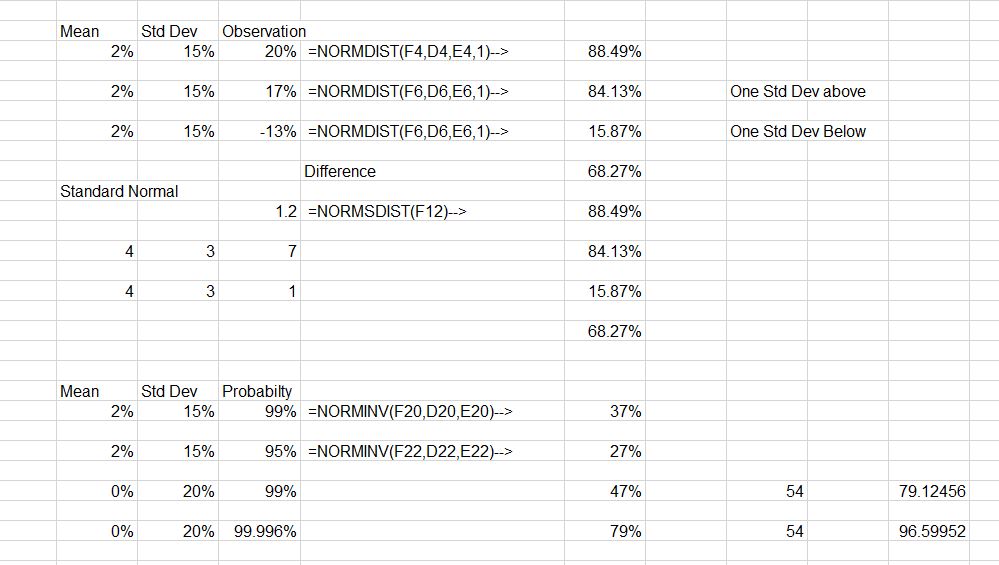 If you want to download files that include exercises to work with the normal distribution you can press the couple of buttons below.

Creating a standard graph of a normal distribution with bands for the standard deviation is included in the second graph. 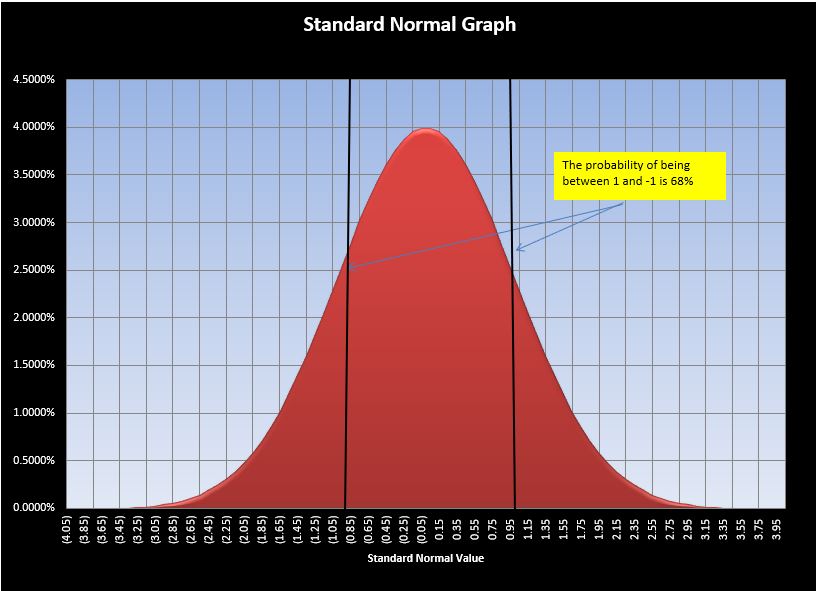 The Weibull distribution is sometimes used in wind analysis to project the capacity factor of wind over the course of a year given the average level of the wind.  This is because wind movements from hour to hour an not normally distributed.  To see why wind is not normally distributed, just think of how many times somebody has told you that the wind speed is negative today (it may change directions, but it is not ever stated as a negative number). On the other hand, when it is really windy, the wind speed is very high.  If wind had a normal distribution, there would be negative wind speeds to offset the very high wind speeds at other times as the distribution is symmetric. 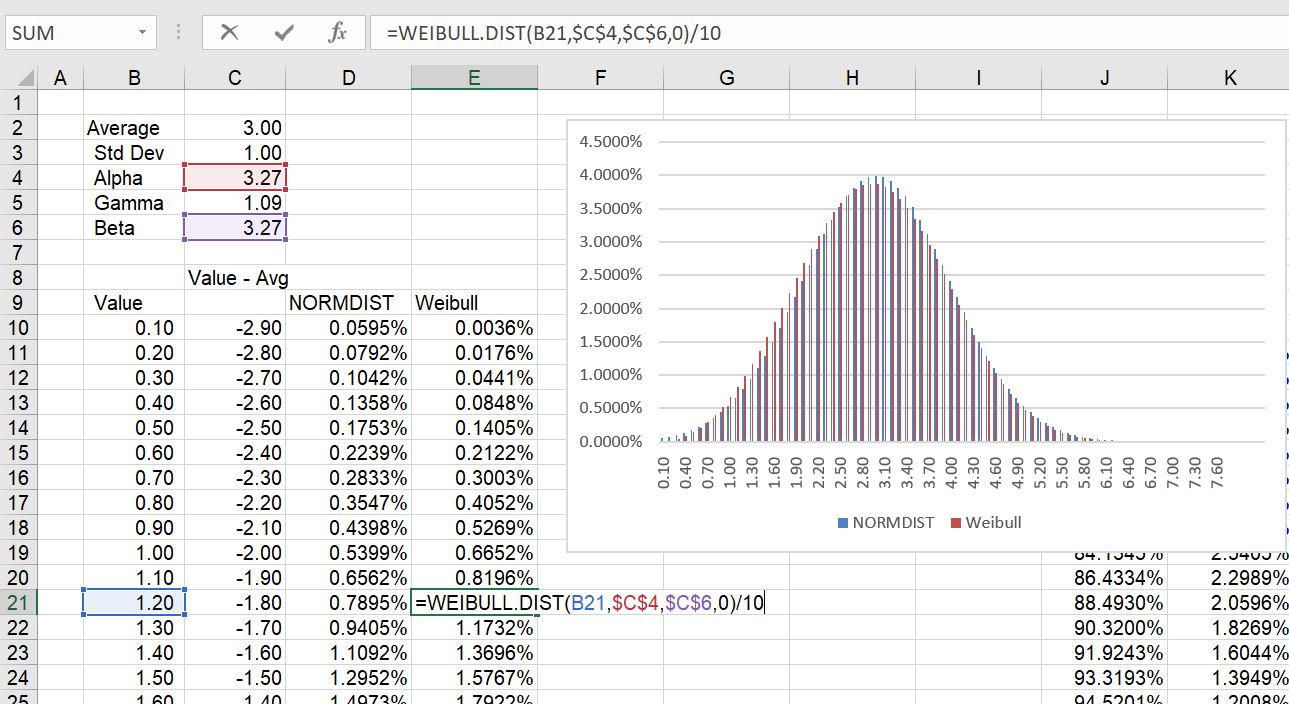 When the wind parameters with and alpha of 2.0 and a gamma of .89 is used, the distribution changes as shown below.  In the diagram below, an adjusted standard value is shown has a mean of zero.  This can be used with the LOOKUP function to derive something like the NORMSINV function.  That is to say, you can put the LOOKUP function into the time series equation instead of the NORMSINV with the table of Weibull values.

The final chart shows the Weibull distribution with different parameters that produces something like a level distribution.  This illustrates the flexibility of the distribution to model alternative situations.