This page discusses treatment of cash flow that comes from changes in the debt service reserve account  — the DSRA –when computing the DSCR and debt repayment. If cash flow from changes in the DSRA account is positive, meaning that the DSRA is reduced through withdrawals from the bank account, then some would argue (correctly) that this cash flow should be included in calculation of the DSCR. After all, CFADS is cash that is available to pay debt service and the reduction in the DSRA is cash. Similarly, if the DSRA account is required to be increased and you must deposit cash into the DSRA bank account, one could argue that CFADS and the DSCR should be reduced. Including deposits or withdrawals from the DSRA in the calculation of repayments with sculpting and the DSCR is not easy.  It can can cause painful circular reference issues. With some mathematics and VBA you can solve the DSRA moves and DSCR calculation, but I am warning you, it is not easy.

Many years ago I had a very smart student who explained to me that in a PPP project with a tight debt service coverage, including changes in the DSRA in the DSCR can be an important issue in financial models. He told me that my class sucked because I did not include this or other complex issues in my class. I became obsessed putting changes in the DSRA into CFADS for years.  But when trying a copy and paste macro or a UDF to resolve the fact that the DSRA is driven by debt but the debt is driven by CFADS, the process blew up. Later, another student told me that the DSRA balance can be used to pay debt service in the final year.  This is a variation of the same issue. Here, the last period change in DSRA is the repayment of the DSRA and this change can be included in sculpting. This again caused some nightmare circular reference issues.

There are a couple of key files where I put the financial formulas, modelling examples and the VBA code for cases where you run into circular references.  You can file these files on the google drive in the Project Finance Section under exercises and then Section D for the Sculpting course.  The first file is the sculpting file that includes a separate section that isolates on the issue of DSRA changes.  The second file is a model with the comprehensive parallel UDF.

Perhaps the ultimate complex issue in project finance modelling is including changes in the DSRA account in CFADS and in the sizing of debt.  This issue can seem relatively minor from a structuring standpoint, but it illustrates a lot of programming and theoretical points.  So lets first discuss the theory.  If you are modelling MRA accounts, most would say that changes in the maintenance reserve account — the MRA — should be included as CFADS (when you deposit money in an account, you should treat it like a cash outflow; when you take money out of the account to pay for extraordinary maintenance, you should treat the money you take out of the MRA account, this is treated like a cash inflow for purposes of computing CFADS and the DSCR).  This treatment of MRA flows smooths out the CFADS to account for capital expenditures for things like re-surfacing of a road. You can then say why not do the same with changes in cash associated with the DSRA account, and you would be largely correct.  As the DSRA account will eventually be extinguished, including the changes in DSRA account will increase cash flow and allow for more debt.  It will thus make the DSRA a less painful item.
The above discussion is arguably all wrong. When you think about the DSRA you could think about the corporate concept of net debt and specifically the notion that cash is tantamount to negative debt. It is very standard to treat cash as negative debt in corporate finance; this includes treatment of interest income and debt repayments — both of which are financing flows and not operating flows. For example, when computing the LLCR as the present value of cash flow divided by debt, you should subtract the DSRA from debt in the denominator and not add the DSRA to the present value of cash flow in the numerator. This is consistent with the idea that cash on the balance sheet (and that is dedicated to debt repayment) can be called negative debt. The same idea should be applied to computing the DSCR.
.
LLCR = PV of Cash Flow over Debt Repayment/(Debt – DSRA Balance)
.
If you agree with this idea, instead of adding DSRA cash to the CFADS, the DSRA cash should be deducted from debt service.  This will increase the effect of the DSRA changes.  The same idea can even be applied to the MRA cash. Maybe the best way to think about this is the large reduction in the DSRA that occurs at the end of the debt term. This money that is received from the DSRA should reduce the debt service on a one-for-one basis. If the change in the DSRA is deducted from the denominator, this happens.  If the DSRA change is in the numerator, the debt service is reduced only in part.
In terms of programming a financial model, you cannot try to force the CFADS and then apply some kind of copy and paste macro if you want to apply the formulas.  This will create a crazy cash flow.  Instead, you need to use some math.  To solve the problem with equations, you can compute the present value of the DSRA movements (discounted at the debt interest rate or the debt IRR) divided by the DSCR if you want to use the method at the beginning of the paragraph where the DSRA movements are in cash flow. After that, you can compute the PV of the debt service without the adjustment for the DSRA moves.  Finally, you can compute the repayments as the repayments for sculping without the adjustment, but then you later make the adjustment for the DSRA.  This is summarised below for the case where changes in the DSRA are treated like other cash flows and where the DSRA changes are treated as negative debt.  The key is to not include the changes in the DSRA, which is the theoretically correct thing to do.

The key for incorporating changes in the DSRA account into sculpting is to split the problem into two parts.  First, you evaluate the sculpting formulas as if there were no movements in the DSRA as normal.  The two key formulas are: Target Debt Service = CFADS/DSCR and Debt = PV of Debt Service. Second you make an adjustment to the debt size (to increase the debt size) because of added cash flow that comes from the DSRA releases this is the total debt plus the PV of DSRA changes.  Second, the repayment is reduced by the DSRA moves (it could be increased if the size of the DSRA is increased) — the amount is DSRA moves/DSCR. This is case 1 described below.
There are two ways the DSRA could apply are to treat the cash flow like operating cash flow (Case 1) or to treat the cash flow as a reduction in debt service (Case 2).  For each of the cases the, the method for computing repayments in the case where the DSCR drives the debt size and the method where the debt size is given and the debt is sculpted.
Case 1: DSRA Changes Treated Like Other Cash Flow and Debt Sizing from DSCR

This method is illustrated in what I thought was a simple example below where the interest rate is zero and the moves in the DSRA are only for releasing the DSRA at the end of the debt term. There are only two years of cash flow. In the example below, note that the 100 of DSRA is divided by the DSCR of 1.5 to arrive at the amount for sculpting, which is 67. This example needs some explaining.  First, there are two years of cash flow when you exclude the DSRA payments.  With a zero interest rate, the PV of the CFADS is 1,20 as shown above.  The target DSCR is given as 1.50.  This means that without consideration of the DSRA moves in sculpting, the target debt service is 400.  Without the DSRA, the present value of this debt service is 400 plus 400 or 800. I assumed the DSRA is 67 (I don’t know why I did not assume a half year of debt service or 200).  So, if we apply the formula above, we get the following:
When you apply these formulas, you arrive at the correct closing balance and the correct DSCR where the DSCR = (EBITDA + DSRA Flows)/Debt Service. For the first year the DSCR = 600/400 which is 1.5 — that is easy.  For the second year, the DSCR = 700/467 = 1.5, which is DSCR = EBITDA/(Base DS + DSRA DS).
This was a real pain, even in the simple example.  But it is a solvable problem.  The problem is solvable even with multiple periods; with taxes and interest deductions; with different DSRA sizing and with changing DSCR’s.  But you do need to separate the process and add the DSRA PV and the DSRA/DSCR separately. 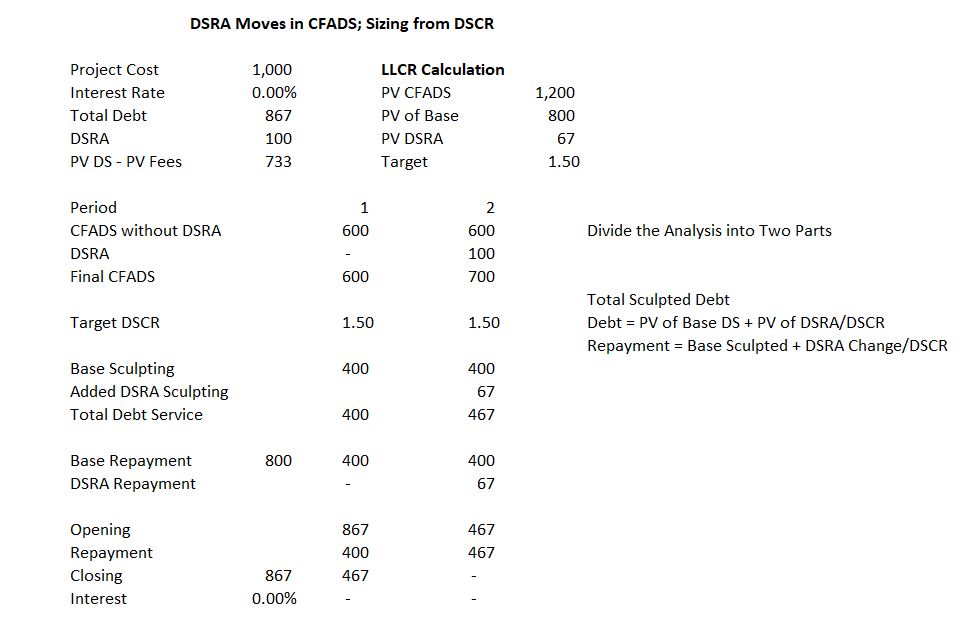 Case 1a: DSRA Changes Treated Like Other Cash Flow and Debt Size Given

When the Debt to Capital ratio is the constraint used to size the debt, the equations are similar, but you need to adjust the LLCR that you use for sculpting: 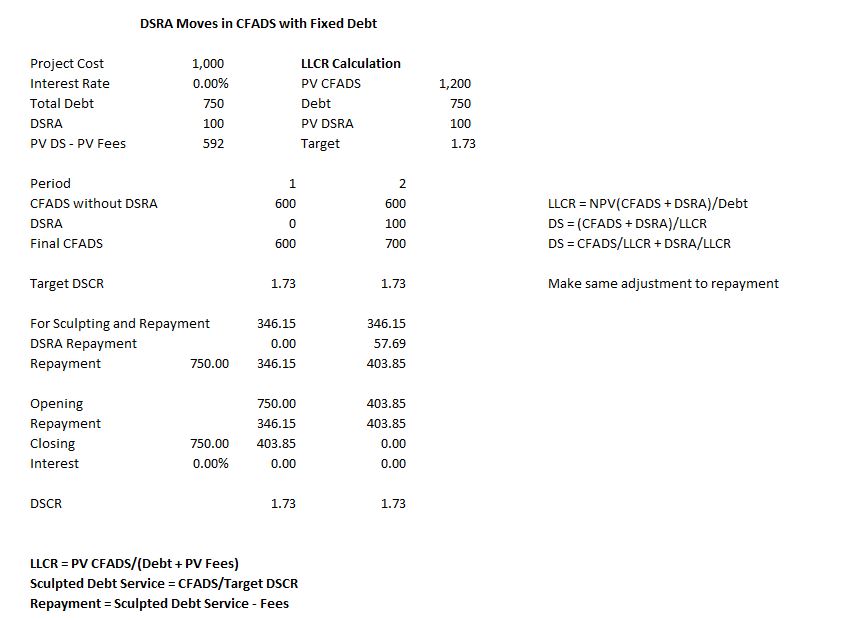 The effects of including the DSRA moves in the sculpting process is illustrated in screen shots below. In the first case the DSRA is not funded but instead an L/C is applied. You should look at the equity IRR.  You can press the check boxes and choose different methods.
In the next screen shot, a funded DSRA is applied, but the DSRA moves are not in the sculpting process.  This is the worst case for the DSRA from the perspective of the equity investor.  In this case the equity falls to a lower level. Note that the check box is unclicked. Not only is the IRR reduced to 12.09%, the debt to capital ratio is also reduced.  The DSCR is the same as the case with the letter of credit.
The third screenshot presents the case with the DSRA funded, but the DSRA moves are included in the DSCR using the mathematical equations shown above. In this case the equity IRR increases relative to the case without the DSRA being included. But the equity IRR is still below the best case where the Letter of credit is used instead of a funded DSRA account. In this case the debt to capital is somewhat higher than the case without making the adjustment.  Note that in these cases the Letter of credit fee and the interest income is not included.  Also note that the check box fir the DSRA in the CFADS is checked and also that the CFADS is increased in the final period.

A couple of videos that work describe the process for sculpting. The first video works through the case where the DSRA moves are included as cash in the numerator of the DSCR.  The video does go into detail about how the VBA programming works, but describes the formulas and how to use the user defined function.
A second video explains the case where the DSRA moves are adjusted in the denominator of and the repayment rather than the numerator. In this case, the change in the DSRA affects the debt repayments on a one for one basis.  This means that if there is cash flow coming from the DSRA of 100, the debt repayments are lowered by 100. You could certainly argue that from a theoretical perspective, if the DSRA gives you cash, it should directly reduce the debt.